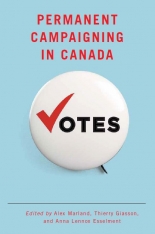 Election campaigning never stops. That is the new reality of politics and government in Canada, where everyone from staffers in the Prime Minister’s Office to backbench MPs practise political marketing and communication as though the official campaign were still underway.

Permanent Campaigning in Canada examines the growth and democratic implications of political parties’ relentless search for votes and popularity and what a constant state of electioneering means for governance. With the emergence of fixed-date elections and digital media, each day is a battle to win mini-contests: the news cycle, public opinion polls, quarterly fundraising results, by-elections, and more. The contributors’ case studies – on political databases, the strategy behind online political communication, the politicization of government advertising, and the role of the PMO and political staff – reveal how political actors are using all available tools at their disposal to secure electoral advantage, including the use of public resources for partisan gain.

This is the first study of a phenomenon that has become embedded in Canadian politics and government. It reveals the extent to which political parties and political staff have embraced non-stop electioneering, and the consequences for our democratic processes and institutions.